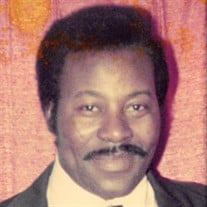 Charlie Mosley was a devoted husband and father; a native of Millen, GA, born on February 19, 1937 to the late Ben Knight and Dollie Mae Gregory. At an early age Charlie joined the Daniel Grove Baptist Church where he served as a deacon and... View Obituary & Service Information

The family of Mr. Charlie Mosley created this Life Tributes page to make it easy to share your memories.

Charlie Mosley was a devoted husband and father; a native of...

Send flowers to the Mosley family.