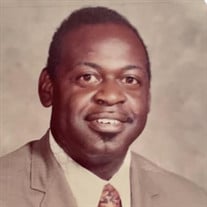 Clark Julius Edmonds, 81, returned to his heavenly home on February 20, 2022, after a valiant battle with a long illness. His devotion to his family and his firm belief in God supported him in his struggle and ultimately gave him peace. Clark was born to the late Felix Edmonds Jr. and Julia Mae Redd Edmonds, an U.S. Soldier and a homemaker/seamstress respectively, in Columbus, GA. on March 19,1940. Clark accepted Christ as his Lord and Savior at an early age. He was immersed in the Christian community that would be his lifelong support. His love for teaching grew from watching his mother as the Sunday school teacher at Macedonia Baptist church. Throughout his life, he served several ministries with missionary work, teaching the Bible and French to students as an adult. In 1960, Clark graduated from Spencer High School with academic honors. He was a well- rounded student that participated in various activities such as band, football, and basketball. During this time, his passion for the sciences and fine arts evolved. Before attended Savannah State University, Clark was a sales representative selling American Standard encyclopedias and King James version Bibles. Later, he graduated from the Savannah State University in 1967 with a degree in biology and accepted a position as a middle school biology teacher in Millen, GA. where he would teach for several years. Clark married the love of his life, Evangelist Marie T. Bowman, on December 11, 1967 in Millen, GA. God blessed this union with a beautiful daughter Knitonyalekka Klarjulese Edmonds. He taught her to read, write, sing and recite poetry. His favorite song was “Oh happy day, when Jesus washed my sins away!” From the very beginning, he dedicated his child to God and encouraged her to explore the beauty of the gospels. Clark was an educator at heart. He loved the LORD with all his heart and wanted to share God’s grace and mercy with everyone. His unconditional love and generosity were shared with so many. His infectious spirit and smile could light up any room. He was kind and humble, and always had time to answer a question or solve a problem, no matter how small. He is dearly missed by his loved ones, who celebrate the fact that he is at peace with his creator. He is preceded in death by his parents, Felix Edmonds Jr. and Julia Mae Redd Edmonds. Siblings Willie (Barbara) Flint, Joseph Flint, Jesse (Phyllis) Flint, and Beverly (Willie) Flint Jones. Clark is survived by his daughter, Knitonyalekka (Stephen) Loney; his sisters Judith (Nathaniel) Flint Lindsey, Delores (Walter) Flint Lotharp, Neville (Freddy) Flint Atkins, Priscilla Flint and his grandchild Destynee Goodman and a host of nieces and nephews. Clark Edmonds funeral service will be held at 11:00 a.m. on Friday, February 25, 2022, at the Williams Grove C.O.G.I.C. Hwy 25 South Millen, GA 30442 Pastor Supt Kenneth H. Thomas will officiate the service. The visitation will be Thursday, February 24, 2022, from 5:00 p.m. to 7:00p.m.

Clark Julius Edmonds, 81, returned to his heavenly home on February 20, 2022, after a valiant battle with a long illness. His devotion to his family and his firm belief in God supported him in his struggle and ultimately gave him peace. Clark... View Obituary & Service Information

The family of Mr. Clark Julius Edmonds created this Life Tributes page to make it easy to share your memories.

Clark Julius Edmonds, 81, returned to his heavenly home on February...

Send flowers to the Edmonds family.