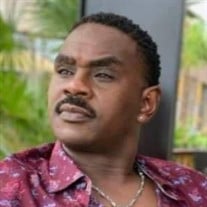 "So do not dear, for I am with you: do not be dismayed, for I am your God. I will strengthen you and help you; I will uphold you with my righteous right hand." Isaiah 41:10 Darrell Vanardo Williams, Sr. was born on April 6, 1973, in Augusta, GA to Georgia Golden and the late Milton Williams, Sr. Affectionately known as "Dump" and "Dave," he grew up in Millen, GA. At an early age, he joined First Baptist Church, where he was later baptized. In 1991, Darrell graduated from Jenkins County High School. After high school, Darrell attended GA Southern University where he graduated with a Bachelor of Health Science Degree in Physical Therapy in 1995. With a passionate desire for learning, Darrell continued to receive additional certifications and training throughout his life. In 2007, he began his career at Augusta Utilities Department, where he worked faithfully until his death. In the latter days of his life, Darrell was promoted to the position of assistant superintendent. Darrell's most fulfilling job was being a father and spending time with his kids. He was very committed to his family. In his spare time, Darrell enjoyed camping, spending time with friends and extended family, and traveling. Darrell is preceded in death by his grandparents the late Fleming (Pearlie Mae) Golden and the late Doc (Fannie) Williams of Millen, GA; his aunt Karen Golden of Pooler, GA; and his uncle Nathaniel Golden, Sr. of Millen, GA. He will be forever remembered by his mom, Georgia Golden of Hephzibah, GA; his fiancé, Ms. Wendy Hastick of Thomson, GA; his children, Darrell Vanardo Williams, Jr., and Delilah Jean Williams of Thomson, GA; his siblings, Cyrstal Craig of Chesapeake, VA Christopher Plair of Augusta, GA, Eric Smith of Orlanda, FL, Milton Williams, Jr. of Columbia, SC, and Fanashia Williams of Augusta, GA; his aunts, Araminta (Willie) Barnes Augusta, GA, Hiawatha Golden, Clara Odom, both of Millen, GA, Janever (Sampson) Manior of Rincon, GA, Deborah (Anthony) Mitchell of Brandywine, MD, and Bernice Riles of Millen, GA; his uncles, Joseph Casses of Statesboro, GA Fleming Golden, Sr., Pooler, GA, James (Jill) Golden of Fairburn, GA, Randy (Grace) Golden, Oceanside, GA Wilbert (Teresa) Golden, Sr. of Hardeeville, SC, Frederick Williams, Millen, GA, and Lanny Williams, Aiken, SC; devoted first cousins, who he considered sisters, LaSandra (Reginal) Corley, Augusta, GA, Chiquita Jackson, Atlanta, GA, Sabrina (Johnathan) Riles-Brady, Ph.D., Atlanta, GA Samantha Riles, Millen, GA, a dedicated neighbor, Isaac Jackson; and a host of cousins, co-workers, friends, nephews, and nieces. Visitation will be Friday, April 1st at James A. Kirkland Mortuary from 1-6 p.m.

"So do not dear, for I am with you: do not be dismayed, for I am your God. I will strengthen you and help you; I will uphold you with my righteous right hand." Isaiah 41:10 Darrell Vanardo Williams, Sr.... View Obituary & Service Information

The family of Mr. Darrell Vanardo Williams created this Life Tributes page to make it easy to share your memories.

Send flowers to the Williams family.