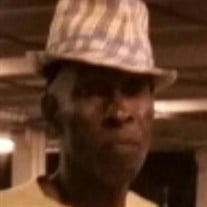 Mr. David Young was born in Jenkins County, Millen, GA to the late Mr. Ben Frank Young, Sr. of Sylvania, GA and the late Mrs. Janie Lue Moore Young of Millen, Ga. He was educated in the Jenkins County public school and later furthered his education in Broward County, Florida. He was a retired Roofer. David will be remembered for his loving heart and willing to help other. He did what he could. He joined the Lane Grove Baptist Church, Millen, GA at an early age, later on in life he took a real interest in the Jehovah’s Witnesses beliefs. David was from a big family which we all enjoyed. Some has preceded him in death. He leaves to cherish his memories: three brothers, Benjamin Franklyn Young, Jr., Aiken, S.C., George Dewey Young, Claxon, GA, and Henry Young (Tina) Young, Millen, GA; four sisters, Carrie Bell Alexander, Hollywood, FL, Gladys Young, Mattie L. (Lester) Foreman, and Ethelene Young all of Millen, GA; a dear cousin, brother Samuel Moore, Philadelphia, PA; many nieces and nephews, including Tina Young, Kenneth Young, Daphne Young and many cousins, other relatives and friends. I FELT AN ANGEL I felt an angel near today, though one I could not see I felt an angel oh so close, sent to comfort me I felt an angel's kiss, soft upon my cheek And felt an angel's loving touch, soft upon my heart And with that loving touch, I felt the pain and hurt within depart I felt an angel's silken wings enfold me with pure love And felt a strength within me grow, a strength sent from above. —Anonymous

The family of Mr. David Young created this Life Tributes page to make it easy to share your memories.

Mr. David Young was born in Jenkins County, Millen, GA to the...

Send flowers to the Young family.