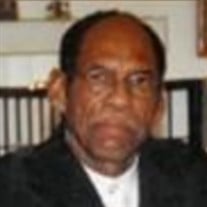 Edward, affectionately known from his youth to recent as “Flickey,” accepted Christ at a very early age and his commitment and love for the Lord fostered an inward journey that led him to become a member of the House of God – 7th Avenue, Ft. Lauderdale, FL. His membership with the House of God – Keith Dominion continued when he relocated to Millen, GA, eleven years ago and became a faithful member of the House of God, Augusta, GA until his death. As a young man, Edward’s life was always centered around service, whether is was in church, his home and or his community. In the home, being the eldest of six children, he voluntarily became a surrogate to his younger siblings in a effort to help his working parents. He was always a helpful individual, willing to offer assistance wherever he could. He was a person who wanted to make a difference. Edward’s resolve to service for his community began at the age of twelve when he, along with three other young Black Men became members of the First African American Boy Scout Troupe in Fort Lauderdale, FL. His commitment to serve in his community also sparked a flame to serve his country. His choice to serve his country led to induction into the United States Army where he ultimately became a veteran of the Vietnam War. He was a historian for family and community. His knowledge will be missed. Family members gave him the moniker of “Mr. History.” He was preceded by a sister, Linda C. Davis Hollis. Edward was a proud father who believed in love, discipline, and respect, especially for elderly people. He believed all able-bodied young men should be educated and providers for their family, and never give up. These ideals, he not only shared with his sons, but also passed this knowledge to his nephews, grandchildren, godchildren, and those who would listen. Deacon Davis is survived by his wife, Lillie Mae Roberson Davis; children, Michael (Bernice) Davis, Patrice Rene (Connell) McIvers, Daniel (Tina) Davis, Alissa Davis, Kimberly (Fred) Davis, Chiquita Roberson, Takeacea (Christopher) Mitchell; siblings, Vincent (Nora) Davis, Brenda Davis (Robert) “Ward, June Davis Andrews, and Eleanor Davis Edgeombe; a host of grandchildren, great grands and great, great grandchildren, brothers-in-law & sisters-in-law, other relatives and friends Visitation will be from 1-6 p.m. today at James A. Kirkland Mortuary.

Edward, affectionately known from his youth to recent as &#8220;Flickey,&#8221; accepted Christ at a very early age and his commitment and love for the Lord fostered an inward journey that led him to become a member of the House of God &#8211;... View Obituary & Service Information

The family of Mr. Edward Earl Roberts Davis created this Life Tributes page to make it easy to share your memories.

Edward, affectionately known from his youth to recent as “Flickey,”...

Send flowers to the Davis family.