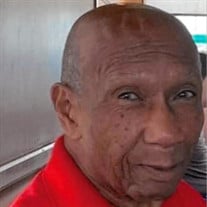 Mr. Ernest Lee Burns was born to the late Mary Frances Burns on January 14, 1939. On March 23rd, 2021 he received his wings and was united with the Lord. Ernest attended the Cousins school in the Perkins community. Later in life he met and married... View Obituary & Service Information

The family of Mr. Ernest Lee Burns created this Life Tributes page to make it easy to share your memories.

Send flowers to the Burns family.