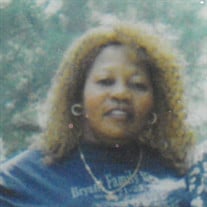 Ms. Ethel Mae Pinkney Shingleton was reunited with her loved ones in Heaven on Sunday, July 5, 2020 at Trinity-University Hospital in Augusta, GA. Born June 29, 1956, she became the sixth child of nine children born to Robert Pinkney and Claudia Mae Atkins Pinkney in Sylvania, GA. Ethel eventually moved from Sylvania to Millen, GA where she married Isiah Shingleton, Sr. (preceded), a devoted wife and mother, she became a member of Brinson Rock Baptist Church, an active singer in the choir, she then later moved her membership to Miracle Temple Baptist Church until the day of her calling. Such as extraordinary woman, Ethel’s love had no limitations while raising her three sons, Danny Lee Pinkney, Isiah Shingleton, Jr., and Travis A. Shingleton, working numerous side jobs as well as being a productive worker at Millen Sportswear, Metal Industry; she still took the initiative to let no child go without, going as far as taking them in to the to raise them as her own; this is just another reason why she’s one God’s gift to the world but the Almighty sent her a blessing when she met Javier Ruiz her significant other who showed her how to be loved. Ethel had a way of capturing the hearts of those around her through the gift of laughter. She was an inspiration to us all, it would be wrong for anyone to interpret her absence as that she is gone; for the seeds of her deeds are embedded within us all and in our hearts she will forever live. Ethel was preceded in death by her son Danny Pinkney, brothers, Monroe Pinkney and Robert Pinkney and Moses Pinkney. She leaves to cherish her memory; her significant other, Javier Ruiz and her sons, Isiah Shingleton Jr., and Travis (Yolanda) Shingleton; eight grandchildren, Zavondric, Jemeria, Brian, Starkera, Nicholas, Tranice, Travis, Jr., and Trevor; Siblings L.B. (Sandra) Pinkney, Lee (Arie) Miles, Aaron (Vivian) Pinkney, Robbie Lee Pinkney, Clyde (James) Sheppard, Alberta Pinkney, Claudia (Clyde) Cooper, Elizabeth (Lester) Bullard, Mary (Buck) Jones, and a host of nieces and nephews and close friends, Alma Tucker, Teresa Mobley and Gloria Shumake.

Ms. Ethel Mae Pinkney Shingleton was reunited with her loved ones in Heaven on Sunday, July 5, 2020 at Trinity-University Hospital in Augusta, GA. Born June 29, 1956, she became the sixth child of nine children born to Robert Pinkney and Claudia... View Obituary & Service Information

The family of Mrs. Ethel Mae Shingleton created this Life Tributes page to make it easy to share your memories.

Ms. Ethel Mae Pinkney Shingleton was reunited with her loved...

Send flowers to the Shingleton family.