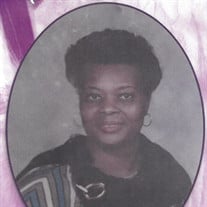 Mamie Lou Jackson Wright was born July 8, 1948 to Hettie (Hardy Saulsberry) and Jessie Ruffin. She surrendered her life to Christ at a very young age and was a ambassador for Him! Although Mamie will be sadly missed by her family, her family celebrates Mam’s transition to Heaven, as she anxiously awaited to be in God’s presence. Mamie often confessed “2Corinthians 5:8, of her confidence and willing rather to be absent from the body, and to be present with the Lord.” Mamie is best remembered for her Great Strength,” her love for her family, and her love for FISHING! During her time of infirmity, she relied on scriptures such as Psalms 73:26 NLT as she confessed, “My health may fail, my spirit may grow weak, but God remains the strength of my heart; He is mine forever. Therefore, her family believes that on May 29, 2020, God allowed Mamie to soar on wings like eagles during her departure. Mamie’s strength gave her the courage to stand up for what she believed. Mamie used strategies/techniques that allowed her to win most fights and she did not waste any time or energy that prevented her from obtaining a quick solution. These were her lifetimes practices that governed her interactions at home, in her community, and while serving in church. Seemingly, Mamie’s Most enjoyable days were the time spent at church and at the time she spent fishing. Mamie was a member of the Hurricane Branch Baptist church, where she served as secretary and choir director for many years. She later joined her husband at Fountain Spring Baptist Church and continued her service for Christ while serving as the church’s secretary, choir director, and mother of the church. Her love for music led her to spend hours practicing within other church’s choir anniversaries. She graduated from Burgess Landrum High School in 1965 and Swainsboro University in 1987. Mamie was preceded in death by her parents and a grandson, Frank Thompson, Jr. She is succeeded by her husband of fifty-five years, Joseph W. Wright, Sr.; six children, Lorenza (Demonica) Wright, Joseph (Estella) Wright, Dexter (Charvay) Wright, Jake (Shemella) Wright and one adopted son Roosevelt Byrd, Jr., Pepita (Anthony) Wilson and Nico Wright; a special god-son Earl Wright, like a daughter, Erica Rigdell and god-granddaughter, Christiana Scott; seven brothers, two sisters, two sisters-in-law, Annie Wright and Geraldine Herndon and two brother-in-law, Johnny Wright and Reginald (Nostalgia) Wright, Mamie was especially fond of Johnny Lee Jackson and Christine Mincey who she grew up with; also she left seventeen grandchildren, twenty-nine great-grandchildren, and a host of nieces, nephews, other family and friends. Mamie Lou Jackson Wright will never be forgotten, for she lives on in OUR hearts; therefore, we call her blessed as she was given the unique opportunity to prepare for her final departure, while being surrounded and embraced by the love of her family and friends.

Mamie Lou Jackson Wright was born July 8, 1948 to Hettie (Hardy Saulsberry) and Jessie Ruffin. She surrendered her life to Christ at a very young age and was a ambassador for Him! Although Mamie will be sadly missed by her family, her family... View Obituary & Service Information

The family of Mrs. Mamie Lou Wright created this Life Tributes page to make it easy to share your memories.

Send flowers to the Wright family.