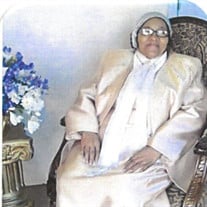 Martha Lou Williams Mitchell was born January 4, 1948 to the late Mr. Israel Williams and Mrs. Josephine Lewis Williams. She attended school at Burgess Landrum and later got a diploma of graduation from Christian Correspondence School in Burke County. Martha began to take a liking to industrial work; she became employed at Sunbeam Plant in Waynesboro, GA; there she worked for twelve years; she was promoted to a line leader ad was asked to train many new comers that came through the doors. She was the best at her job. Later the Sunbeam Company closed. She then was employed with Evercare, also in Waynesboro, GA; there she worked until she retired. Therefore, if anyone is in Christ, the new creation has come, the old has gone, the new is here! (2 Corinthians 5:17) At an early age she accepted the call of Christ into her life and was filled with the Holy Ghost. She became a member at Miracle Deliverance Center of Millen, GA; later she moved her membership with the Unction of the Holy Spirit to serve in the Gospel at Outreach For Christ Ministry. She served as a faithful member, usher, preacher, prayer warrior, praising and intercessor. She showed all the fruits of the spirit. She lived what she preached until she was called to be with her King. Truly she was a mother of nations to all. She loved Jesus, most of all and she loved her family dearly. Left to Cherish her Memories: Daughters: Josephine (Terri) Williams, Ft. Lauderdale, FL, Brenda (Marlon) Sapp, Sarah Hills, Teako Hart, all of Millen, GA, and Kerry (Louise) Williams, Sardis, GA; Sons, Calvin (Elsaree) Snelling, Trenton, NJ, Max (Denise) Snelling, Dwayne C. Cynthia) Snelling, both of Millen, GA, Israel (Paulette) Snelling, Garfield, GA and Andrew Hart, Waynesboro, GA; Sisters; Lizzie Mae Slaughter, Long Island, NY, Annie Ruth Spence, West Palm Beach, FL, Vera Williams McClain, Millen, GA; Brothers, David (Willie Mae) Williams, Pastor John L. (Pauline) Williams, Ronnie Williams, James (Mattie) Williams all of Trenton, NJ, Otis (Stella) Williams, Sardis, GA, Donald (Jeanette) Williams, Waynesboro, GA Darrell (Darlene) Williams, Ben, PA; twenty-five grandchildren, and a host of great grandchildren, and great, great grands.

The family of Martha Lou Mitchell created this Life Tributes page to make it easy to share your memories.

Send flowers to the Mitchell family.