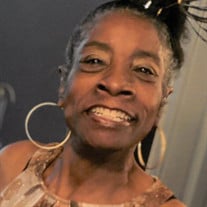 Sarah B. Sessions was born October 3, 1948, to the late Arthur and Addie Bell Brinson in Millen, GA. She is one of eight siblings. Sarah was called home on September 26, 2021. Sarah was raised in Jenkins County and attended the Jenkins County School System; she also attended Ogeechee Technical College where she received her diploma for Medical Assistance on July 24, 2003. Sarah was joined in holy matrimony to the late Edward Earl Sessions and to this union a son Edward Sessions, and a Daughter Sherri Sessions Jones. Sarah accepted the Lord and Savior at an early age. She joined Fountain Springs Baptist Church where she served as an usher and treasurer. She worked at Cooper-Wiss in Statesboro, GA until its closing; then later she worked for Metal Industries in Millen, GA, her last place of employed was with Willow Pond in Statesboro as a nursing assistant until her retirement. Sarah was a God-fearing woman who loved having fun and never met any strangers. She was a giving person who had a smile like the sunshine. That smile, most definitely, will be missed from our lives. Sarah was preceded in death by her parents, two sisters, Annie Bell Brinson, Ida Lee Lewis, three brothers Artis, (Sunny Brinson), Argie (Buddy Brinson, and Henry (HM) Smart and one nephew O.D. Brinson. Sarah leaves to cherish her sweet memories: a son, Edward (Donna) Sessions; a daughter, Sherri (Felix) Jones; two sisters, Gloria (Edward) Jackson, and Josephine McGraw, one nephew, Otis (Daniel) Brinson, four grandchildren, Kenitris (KeKe) While, Bianca While, Edward (ManMan) Sessions and Darnelius (Tank) Sessions; a special cousin, Lottie Walker, and a special friend, Ms. Barabara (BJ) Scott, along with a host of nieces, nephews, other relatives and friends. Visitation will be 1-6 p.m. Friday, Oct. 1, 2021

Sarah B. Sessions was born October 3, 1948, to the late Arthur and Addie Bell Brinson in Millen, GA. She is one of eight siblings. Sarah was called home on September 26, 2021. Sarah was raised in Jenkins County and attended the Jenkins County... View Obituary & Service Information

The family of Ms. Sarah B. Sessions created this Life Tributes page to make it easy to share your memories.

Send flowers to the Sessions family.