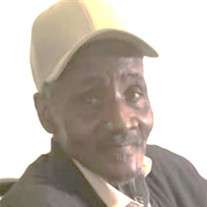 God in His infinite manner has called home our beloved Willie. On Thursday night, Willie answered the call and was ready to be with the Lord. Mr. Willie Baldwin, Sr. was born December 12, 1948 to the late Mr. Alex and Eloise Baldwin in Selma,... View Obituary & Service Information

The family of the late Mr. Willie Baldwin has created this tribute page to share your memories of our beloved.

God in His infinite manner has called home our beloved Willie....

Send flowers to the BALDWIN family.