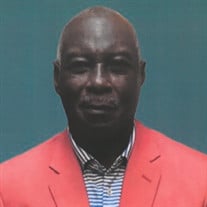 Deacon Willie (Will) James Roberts, Sr., was born July 9, 1943 in Perkins, Georgia. He was the son of the late Walter Roberts and Louvonia Davis Hart, and the stepson of the late Eddie Hart, Sr. Will received his education in the Jenkins County School System, but he acquired vast knowledge and skills from his work in the farming and construction industries. He worked for several years for Bellcrest Homes in Millen, Georgia, before having to retire due to a medical disability. Will was joined in Holy Matrimony to Susie Mae Luke in 1963. He was an affectionate husband and they remained married for fifty-four years until Susie was called to glory in 2017. Will joined Bargeron Grove Baptist Church in Perkins, Georgia in 1957. He was ordained deacon in 1995 and served in that capacity until his transition from this life. Manifesting his humble spirit, Will like Christ dedicated his time and talents to service. He served seamlessly as deacon and treasurer while also performing the custodial duties of a trustee in excess of twenty-five years. The works Will performed in the Lord’s name were a testament of his integrity and character. He not only served the Church, but he also served his community. He was often called upon by neighbors for transportation to the doctor, the bank and to the grocery store. He did these acts of kindness as a continuation of his service to God’s people and out of a compassion to help those less fortunate or who could not do for themselves. Aside from his community and church related activities, Will loved the sport of hunting. His fondness for hunting led him to breed and train hound dogs, not only for himself, but for his fellow-hunters. The need to house and transport his dogs led him to employ his construction skills at his leisure to craft dog houses and kennels for himself and for others. Will most especially loved his family. He leaves to mourn: one daughter, Dr. Janette Roberts (Reverend Donald) Robinson; three sons, Mr. Leroy Luke, Mr. Willie James (Michelle) Roberts, Mr. Bruce (Iceline) Roberts; two sisters, Mrs. Vivian (George) Oliver, Ms. Gwendolyn Scott; two brothers, Mr. Leroy Roberts, Deacon Eddie (Pam) Hart, Jr.; six sisters-in-law, Ms. Lottie Garvin, Ms. Jessie Mae Dampier, Ms. Alberta Brooks, Ms. Rosa Lee Herrington, Ms. Merlene Cunningham, Ms. Dorothy Luke; three brothers-in-law, Deacon Leroy Luke, Mr. Willie Luke, and Mr. Roosevelt Luke; four aunts, Ms. Easter Archie, Ms. Florine Davis, Ms. Ola Davis, Ms. Earlease Davis; two uncles, Mr. Jacob Davis and Deacon Andrew (Grace) Davis; thirteen grandchildren, seven great-grandchildren and a host of cousins, nieces, nephews, church members and friends. God’s will was executed and Will received his wings to enter the heavenly gates. He will be deeply missed by all who knew and loved him.

Deacon Willie (Will) James Roberts, Sr., was born July 9, 1943 in Perkins, Georgia. He was the son of the late Walter Roberts and Louvonia Davis Hart, and the stepson of the late Eddie Hart, Sr. Will received his education in the Jenkins County... View Obituary & Service Information

The family of Deacon Willie James Roberts Sr. created this Life Tributes page to make it easy to share your memories.

Send flowers to the Roberts family.